In Search of the Elemental Body 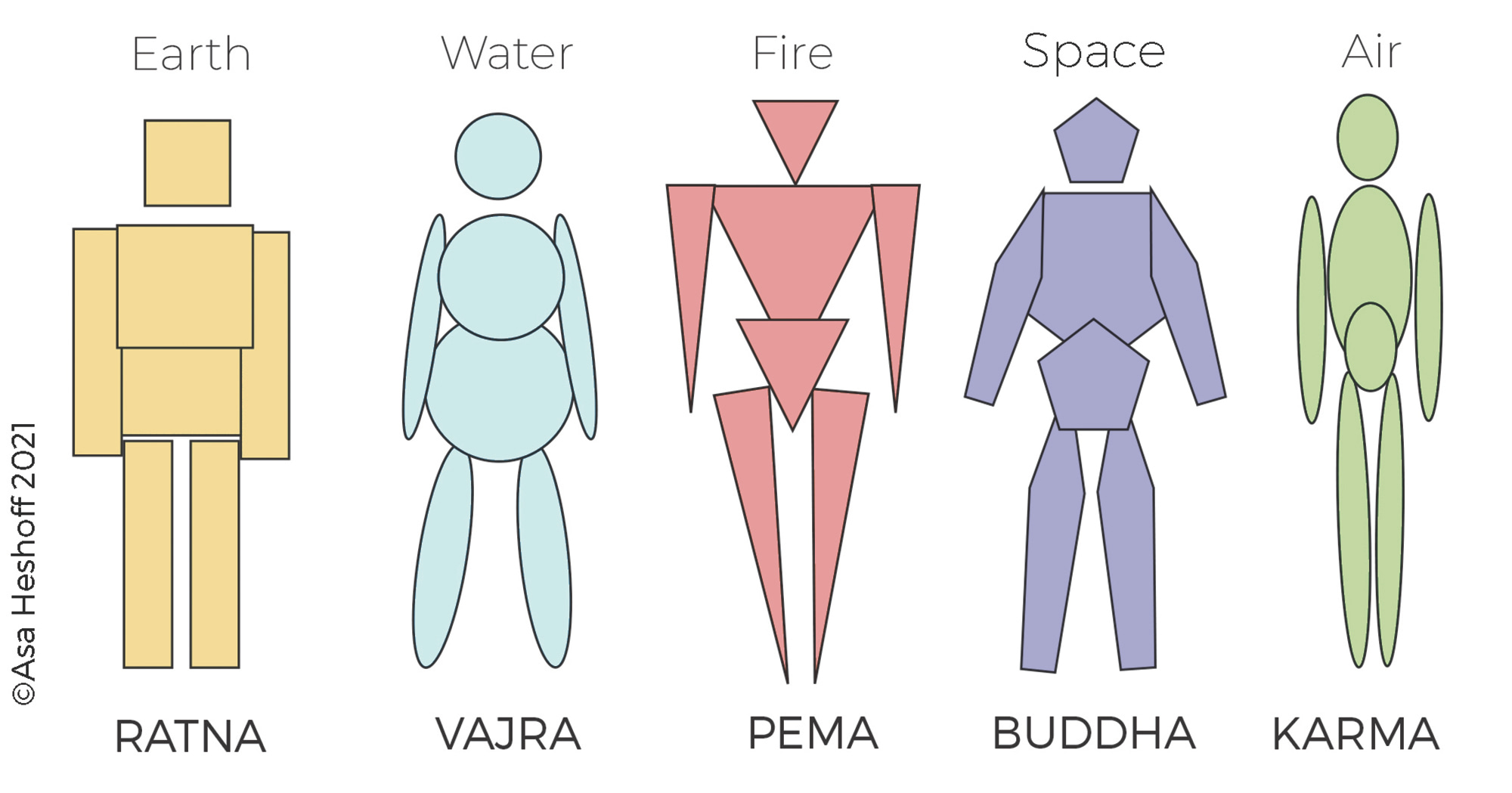 The Tibetan empowerment or wongkur is an essential part of Vajrayana—Buddhist tantra—as well as Shaivite and other Eastern traditions. It is the entry point, the transmission of the seed of enlightenment, and permission to enter the mandala of enlightened mind. One obtains the stream of form, energy and consciousness, transforming mundane aspects of embodiment, sound and awareness into their sacred, transcendent form. Empowerments can be brief or quite elaborate, lasting days. During the preparation process of the longer empowerment rituals, one is given a stick or flower that is thrown onto a colorful mandala plate of the five Buddha families. Depending on where the object lands, this shows the family to which you belong. Maybe some invisible karmic hand guides the placement of that flower, or maybe it is purely symbolic or suggestive. In remote times, before empowerments had become highly formalized and stylized, this may have been left to more than chance. A teacher or master meditator likely directed the student towards the body of practices subsumed under one of the five possible families. This could be a life long proscription, or something to be reviewed and reassessed at a future date, depending on the inner changes of the meditator.
Of course teachers still do prescribe specific meditations for students, but this is often generic and colored by the guru’s lineage and background. In any case, it behooves the seeker to investigate and develop a personal understanding of what such family alignments mean. Doing a variety of deity meditations, we may receive a direct experience (Tib: nyam) or psychic insight (Tib: ngön shay) into a meaningful connection. This is not common, nor something upon which we can reliably depend. But we can learn much from our own particular body, mind and emotions. They reveal our predilections, tendencies, strengths and weakness, and our basic make up as an embodied human being. There is a saying that if you want to know about your past karma, look at your present thoughts, feelings and activities. And so investigation into our body and mind is not outside our spiritual, transformative path.

There are good reasons why we should want to know our Buddha family connection, organically and inherently. Most obviously, it directs us towards the deities, protectors, meditations and mantras that are aligned with our nature. Such practices would be a more certain path to both personal healing and inner change. Since the five Buddha families are also expressed as the five Elements, this orientation can be a roadmap to one’s entire life trajectory. We expect a strong correspondence between spiritual typology, psychological type, and body type. Knowing and confirming this relationship gives valuable guidance towards our career, lifestyle, diet, activities and more. And like other typologies, a Buddha family-Elemental system can show what kinds of compatibilities and antipathies there are between people.
Yet, body-mind typology can be over-simplified. For further refinement, there are excesses, deficiencies and distortions for each category and also a series of possible subelements. Because the universe is built upon a 5-part template, The Buddha family is an accurate base upon which to build these understandings. With investigation, we can discover that today’s most popular typologies, such as the Enneagram and the Jung-based Myers-Briggs system, all have the five Elements as their foundation, but with a series of omissions, duplications, mixtures and subelements that them inaccurate on many levels. They each deserve a detailed analysis to demonstrate what is right and what is mistaken, using the litmus test of the 5 Elements and their variations.

In seeking our Buddha family, the physical form is a rich area of investigation, and absolutely central to Tantra. It is thus interesting that in the more informal West there has been less attention to the body than tantric tradition itself would dictate. This problem was already inherent in Vajrayana, where body practices (Tib: tsa lung) are compartmentalized and separate from daily life. In the past, Tibetan lamas and monks were notoriously out of shape and unhealthy, largely because of this disconnect. Chinese Qi Gong has had a far more complex and integrated approach to embodiment, which includes extensive health practices, movements and diet. But without needing to alter or disrupt the extraordinary tradition of Buddhist Vajrayana, we can greatly augment our own body practice and development, drawing on both the East and West. So before building up a picture of the Elemental body, we need to look at the resources that can help us complete this process.

Ancient Ayurvedic science was transplanted to Tibet, augmented by revealed teachings, including the Yutok medical system. Ayurveda is based on the five elements, which are parallel to the five Buddha families. People, diseases and medicines are classified according to their elemental properties. This includes body types and temperaments. Unfortunately we are limited by the traditional dosha system, which (inexplicably) compacts the five elements into a more convenient three modes. This same truncated system was to form the basis of Tibetan medicine. Apparently though, a pure 5-element system did exist as Buddhist Ayurveda which arrived in Thailand intact, though as Indian Ayurveda took root during modern times it is now only known to a few. Nevertheless, the body types of Fire (Skt: pitta Tib: may), Air (Skt: vatta Tib: loong) and Water (Skt: kapha Tib: beken) give us a good start in understanding our Elemental body constitution—and its Buddha family allocation.

Some of the most ancient writings on the Elements are found in the Vedas and Upanishad commentaries. Like its close Buddhist relative, Hindu tantra, in the form of Shaivite, Vishnavite, and Samkya-based yogic traditions, gave tremendous attention to internal energy anatomy. The dynamics of pathways, chakras, inner deities and seed syllables are described in detail, as a guide to working directly with these forces. However there is no actual body typology, other than the Ayurvedic influence as seen in modern day yoga.
At the same time, it is ironic that the caste system which was so fundamental to India and most pre-modern civilizations, makes “type” into an inherited trait, and creates a false hierarchy of more and less valuable kinds of people. This sadly demonstrates how even the greatest truths—such as the five Elements—can be turned upside down into disempowering dogmas instead of elevating ideas.

The Western Elemental tradition is perpetually attributed to Empodocles (430 BC), though there is ample evidence that this originated through the five Elemental systems of India and Egypt by way of Pythagoras (500 BC). Losing the element of Space, the four element system developed through Aristotle and Hippocrates (400 BC), morphing into the full-blown four-humoral system by the Roman physician Galen (200 AD). Thus arose the four temperaments—melancholic, phlegmatic, choleric and sanguine—representing both a psychological and physical type. Fully materialized, Elements went from formative forces and information grids to liquids sloshing around the body as “humors.” These ideas would last over 2,000 years, up until the present day, persisting in its near-original form within Greek Medicine and Unani-Tibb of the Middle East, Pakistan and the India subcontinent. Fortunately, they do give us wonderful observations of four body types, with space gone missing.

Touch and physical manipulation are likely the most ancient of healing arts, taking different forms in ancient China, Greece, Egypt, Rome and on through the development of Western civilization. But the trail we are following here begins with, of all people, a student of Freud. William Sheldon had already developed his well-known somatotype theory in the 1940’s. Based on three primary tissues that exist in the newly created human embryo, he described the basic body types of Ectomorph, Mesomorph and Endomorph with many gradations in between. Around the same time Wilhelm Reich, Freud’s pupil, had observed very specific types of protective adaptations or body-armoring in people. This was further developed by Alexander Lowen and others, becoming the first full-fledged form of body psychotherapy. The five types that were codified in this system are named according to their pathological distortion. Taken up by a series of authors and clinicians, these types have gone through a number of name changes, the one by Kessler being the most elegant: Leaving, Merging, Aggressive, Enduring and Perfectionist. These correspond to the characteristics we would expect from a preponderance of Space, Air, Fire or Water and Earth in our biological make-up. Reich, Lowen, Kessler and others had rediscovered the existent template of body typology—and distortion.

The central process of homeopathic medicine is matching a total medicinal remedy profile to every aspect of the patient. This entails all symptoms, sensations and psychological events experienced by the person, but also includes various signs and observable differences, such as body structure, facial characteristics and so on. In spite of all the variables, they conform to the fact that in homeopathy there are five underlying patterns that create all chronic illness. It is important to understand that the concept of Miasms developed based on observation, without reference to the tradition of humors or Elements. Again, the natural template of reality was re-discovered in this set of constitutions. With a greater focus on internal disease, homeopathy does not an extremely detailed approach to body morphology.
Observation and analysis of the meaning in the body’s form has it origins in ancient India, Mesopotamia, Greece and China, particularly focusing on the face (physiognomy). This physiognomical approach was particularly popular in 1800’s before it fell out of favor with modern medical science. Also, the Chinese system of facial diagnosis, while very detailed, follows the quite different five-phase or five-process system, rather than the five Elements. However some intrepid Australian homeopathic investigators have created an in-depth system of miasmatic, facial feature analysis. This corresponds to the 5-Element paradigm perfectly, in spite of the fact that they are unaware of these ancient traditions.

In spite of all these additional resources from different locations and historical epochs, it is Vajrayana, Himalayan Buddhism, that forms the base on which we can successfully build. The five elements are part of the original teachings of Buddha, both as cosmology and as meditation objects, as part of the ten kasinas. These ideas flowered into the Mahayana and reached a high level of sophistication in Tantrayana. Though it focuses much more on the spiritual, transformative aspects of life, a number of modern pioneers have begun to integrate Western psychology with Buddhist Element systems, including Chogyam Trungpa, Tenzin Wangyal, Ngakchang Rinpcohe and others. While these focus on the human psyche, as Western Buddhist practice matures, the body must inevitably follow, like two sides of the same coin.
Next month we will go further in detailing what impact our Buddha family and a preponderance or deficiency of Elements, has on body composition, both as a long term pattern and a defensive adaptation. This can guide our practice towards ever greater expansion and realization.